Beer from the Brewing Grave 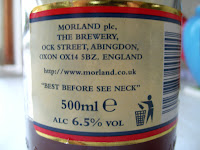 My party went well. The nine of Phoenix was sunk happily and then augmented by Wernesgruner Pils, a beer I used to drink in Germany long before Aldi kindly imported it and a Czech beer supplied by the good people at Laithwaites, Primator. Both might be described in detail some other time, but filled the gap nicely and were appreciated by the die hards, who made the switch from ale to lager with obvious ease!

I am always keen to impart some knowledge and to broaden my friends beer experience, so I did an impromptu tasting of Kriek Boon and Oude Kriek Boon. For those interested, I reviewed both of these on the Oxford Bottled Beer Database in 2006. We then got on to discussing aged beer. I have some quite old Young's Special London Ale, but as this was my friends, I dragged out a bottle of Morlands Hen's Tooth. Morlands were taken over by Greede King in 2001 and closed, so this bottle is around seven years old.

The beer is bottle conditioned and opened with a gratifying hiss of CO2. It is a clear bottle which had been kept in the dark from the date of purchase and a large yeast deposit was still affixed to the bottom of the bottle. The beer poured clear and bright. It had a toffee/marmalade nose and great body and condition. It opened up with fine Seville orange flavours, developing into a toffee/ madeira middle and ended with a distinct marmalade, toffee and hop finish. It was a stunning beer. I am not really into aged beers as a genre, but this was quite something. I have two more left! Might give 'em another few months, but I suspect they may be at their zenith now.
Posted by Tandleman at 12:05

I remember drinking this beer 'back in the day' and enjoying it; the comments about oranges and marmalade do bring back memories. It seems to be a pale comparison now it's in the hands of GK.

Shocked to see how it has matured and aged so well though. Out of interest what was the Best Before date?

Hmm, horses for courses I think. Too much marmalade in this beer for my taste and the toffee is cloying on my palate. Neither refreshing or satisfying, so fails my beer taste test.

Alex - Refreshing, no, but satisfying, yes! It was more a piece of history or maybe beer theatre. This is not a beer I'd want much of, but then again it wasn't about that.

Maeib. I couldn't decipher the date on the bottle tasted, but I checked the other two. Best before 05/09/00.

Would be interesting to compare it with today's Hen's Tooth.