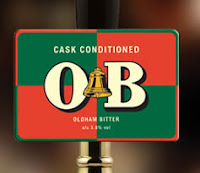 In this neck of the woods you either love Robinson's beer or hate it. There's quite a few of the Stockport brewer's pubs in my area and tonight saw me in one for our monthly CAMRA meeting. Most sell Unicorn, a best bitter of 4.2%, a lot sell Hatter's Mild and some, like the Royal Oak in Werneth, Oldham, sell both and OB Bitter.

OB Bitter is a recreation of the bitter brewed by Oldham Brewery which was taken over by Boddington's (remember them?) in 1982. After five years of ownership Oldham was closed and the beers moved to Boddington's own brewery, now a hole in the ground. After Boddington's demise, the beer was inherited by Whitbread and brewed all round the then Whitbread empire, ending up with Interbrew after Whitbread went tits up. It finished its days, changed beyond recognition, at Burtonwood Brewery where it languished and died.

A year or so ago, Robinson's bought the rights to the brand and have made great efforts to recreate the beer. As the recipe received from InBev from whom the brand was bought was unusable, Robbies enlisted the help of two former OB brewers, John Barron and Wilf Burgess, who helped produce the genuine recipe from which the beer is now brewed. Purists will no doubt argue that the brand should have been allowed to die, but while it may not be an exact copy of the original due to yeast changes, it is a good beer in its own right and satisfies a local need. The beer is going great guns and is permanently listed by Robbies. It has gained a good foothold in Oldham.

I had a pint tonight. The beer is 3.8% abv and is bittered using Goldings, Fuggles and Hallertau hops. Robbies yeast is evident, but the beer is clean and appealing. Robbies Mild was dry, and fruity with that familiar Robbies "house yeast" edge. Robbies beers are available in over 400 tied houses. They are a major Independent Family Brewery and have an increasing presence in the free trade too. They also brew the barley wine Old Tom which is widely available in bottle and cask. Seek them out.
Posted by Tandleman at 23:30

Well I have mentioned Thwaites and will soon be mentioning John Willies. Surprise!