Not All German Beer is Great 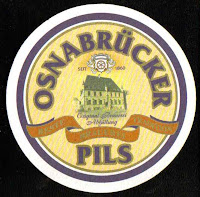 Now as a regular visitor to Germany, I knew this of course, but this visit to Osnabrück was a reminder that the interesting beers scenes so familiar to me in Bavaria, Franconia, Cologne and Düsseldorf, are not repeated throughout Germany. This was "ordinary" Germany, where beer is just an amber liquid to most people.

We arrived on time with the superb Air Berlin. My top and favourite airline. It had obviously been throwing it down beforehand, but we arrived in glorious sunshine and it stayed that way until dark. A neat little bus took us off to the city through flat but attractive countryside. The North German plain, fought over fiercely in the Second World War, is still a garrison area for what is left of the British Army in Germany.

Now it has to be said that Osnabrück is not any kind of beer Mecca. The dominating brew seems to be Warsteiner, with Osnabrücker Pils and Alt providing some variety. Osnabrücker Pils will not set any heather on fire. It is pale, soft, under hopped and that is about all. The "alt" is not a true alt to anyone who has visited Düsseldorf, but just a brown. fairly neutral liquid. But 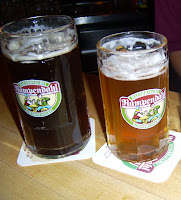 there is a brewpub. Now when someone says brewpub in Germany, I groan inwardly. This usually means a pale unfiltered pils type 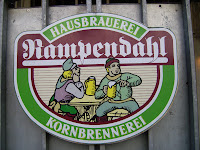 liquid and darker unfiltered dunkel type liquid. Hausbraüerei Rampendahl is in a handsome building, is extremely pleasant inside and has extremely boring beer. Guess what? Yes an unfiltered pale and dark as the only two offerings. Both were sweet and uninteresting with the dunkel being marginally better. The brewery itself is a very decent, modern piece of kit, capable of so much more. It is a source of constant amazement that so much good brewing kit is put to such mundane use in Germany! Missed opportunity.

The only other beer of any interest was a honey wheat beer sold at the Christmas Market. This beer, Ambrosius Brau, by renowned honey expert Herman Krischer of Oberzissen was bottle conditioned, Belgian in palate, spicy and slightly bitter with a honey edge. I am not sure how the Rheinheitsgebot is got past, but it was different and welcome for that. It seems to me, apart from a few areas, German brewing is stagnating. Maybe beer purity laws aren't always a good thing?
Posted by Tandleman at 10:33

Nice to see you sharing your beery observations, Peter!

I agree with the final sentence, and have for some time-- the Reinheitsgebot isn't a guarantee of good beer.

Did you by any chance run into a specific ex-pat Yank while in Germany?

Looks like you should've taken the train down to Muenster for some delightful Pinkus Mueller drink instead. A session of the house Alt, Spezial, and Weizen would've been a treat.

BTW, Tandleman the German Beer Fan, have you gotten your fare share of Zoigl yet?

Ah Yes. Had I had longer than just a flying visit, I would have. I also had to take into account my better half's wishes. It's not ALL beer and skittles you know.

I did though get some lovely Staropramen Dark. First time for me.

Zoigl will have to wait for another time!

Staropramen Dark is ok but there are far better Czech dark lagers...

It was all there was and new to me. I have enjoyed Bernard Dark and Budvar Dark more. I'm in Prague in May and hope you'll give me the insider view of it.

I'd be glad to! You won't need to drink the likes of Staropramen if you know where to go! Out of the big brewery beers, Budvar is still quality as is unpasteurised Pilsner Urquell, but aside from those I'd stick to beers from the small breweries.

Not sure I'd recommend Zoigl to someone who's not already explored quite a bit of Franken in general (and Franconian Switzerland in particular). Just not sure it's worth the travel time.

Only been to Zoiglland once myself, and on this visit, some beer was even GOOD, but some was also downright off. (Sorry, my first ever blog entry, and it's only in Deutsch, and I'm not sure WTF's wrong with the text formatting. Not sure I care. The hyperlinks are to various photos.)