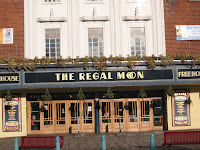 It has been pointed out to me that I have mentioned too many Wetherspoon's pubs in my blog comments about London. Without wishing to be too defensive, I have only mentioned three I think out of the ninety odd in London and two of them are within a five minute walk from my London abode. They are pretty mediocre, but then again, most of the surrounding pubs are too.

It is not just London of course, but love them or hate them, you can’t ignore the somewhat dominating presence of JD Wetherspoon on almost every UK High Street. According to their web site, the company aim is for “comfortable, music-free pubs, offering excellent beer, all-day food and first-class service”. It is highly debatable whether they reach this admirable aim in most of their outlets, but at least they offer choice. In London, for me at least, particularly in summer, they offer cool, relatively well kept beer, in contrast to the unpalatable warm beer I often find elsewhere. They also provide a break from the usual London Pride, Speckled Hen, Abbot and Bombardier offerings so beloved of pubs in the capital. They are of course are much cheaper too, which appeals to my Northern thriftiness.

As Wetherspoon's themselves point out, they have 131 pubs in the Good Beer Guide 2008, so some CAMRA members at least must think them OK. Equally it can correctly be argued that the vast majority aren't. My own CAMRA branch has one in the guide, the Regal Moon in Rochdale. It is pictured above.

What do others think?
Posted by Tandleman at 20:53

I do use a couple of Wetherspoons pubs from time to time, although some are beyond the pale. If the manager has an interest in ale the beer selection can be great. Otherwise I avoid them like the plague.

In some towns, like the one my parents live in, good pubs can be few and far between, and the local Spoons becomes the best of a bad bunch.

I do use a couple of Wetherspoons pubs from time to time, although some are beyond the pale. If the manager has an interest in ale the beer selection can be great. Otherwise I avoid them like the plague.

In some towns, like the one my parents live in, good pubs can be few and far between, and the local Spoons becomes the best of a bad bunch.

PS. You might want to consider taking the word verification off your comments box. I've never enabled it on mine and yet have had very few spam messages.

First of all, a hearty YES to the recommendation about comments. You really don't need to worry about them unless you start writing truly daft shite that inspires people to insult you. And we know that won't happen, eh?

At any rate, as a one-time visitor to your fair shores, I'd note that we (by which I also mean you and I, but otherwise myself and others) visited several Wetherspoon's over a fortnight, along with a good many independent pubs. Several of the JDW's (like the one in Penzance) were shite, and the service did run to slooooooow. A few, like the Counting House(?) in Glasgow, were great pubs with excellent beer in fine condition. The food appears to be reliable and in some cases, very good, and they were all reliably clean.

I know y'all have issues about chain pubs that simply don't exist in the States, but it seemed to this foreigner that the Wetherspoons could be judged on a case-by-case basis.

I'm a bit unclear about that "issues about chain pubs that don't exist" bit there, Jeff.

I tend to think putting Wetherspoons pubs in the GBG smacks of desperation. However, when outside of your normal comfort zone, ie in a new town, they do mean cheap beer and food. Why is it though that the Northern ones aren't as good as the rest of the country?