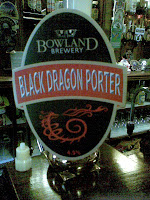 I spent yesterday in Ulverston at my mate Graham's place. It was glorious weather. On the way we stopped for a couple of halves at the Angler's Arms, a neat boozer opposite the preserved steam railway in Haverthwaite. Pick of a bunch of seven beers was the excellent Bowland Black Dragon Porter, which was chocolatey, dry and satisfying. The pub at 2.30 in the afternoon was vibrant and full of banter. To add a note of nostalgia, this is a "House of Mitchell" pub. Mitchell's of Lancaster, a former brewery is now a pub company only. It used to brew very good beers and is credited by some with inventing the term "Extra Special Bitter". ESB for short.

Ulverston has a brewing history too. It used to be the home of Hartley's Brewery, which still stands, minus its chimney. Used now as a depot by Robinson's, many of the town's pubs still bear the Hartley name, but the beers now come from Stockport. Increasing "Robinsonisation" may see the disappearance of the name altogether. Now Graham warned me that there are only two pubs with a decent selection, but as I hadn't been there for a while, I dragged him ro 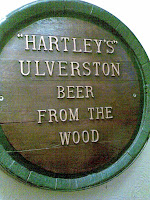 und a few. I'll spare you the details. Poor beer abounded with Hartley's XB leading the charge and the inappropriately named Double Hop not far behind. I have praised Robinsons in the past but they need to do something about their Lakeland Estate on this showing. The pubs though were great. Small, multi roomed and characterful.

We finished in the excellent GBG listed Swan, a Robinsons cast off, where a large selection awaited. Top pick for me was Hawkshead Gold, but there was plenty to go at. A word of warning, If the locals offer you a taste of chilli sauce, don't do it. I did and the merest smidgen rendered me tearful, hiccupping with an on fire mouth for nearly an hour! Apparently this stuff is super-concentrated in some way and all but deadly. They did warn me though! With great locals, assassin strength chilli, excellent beer and pickled eggs on sale, what more could you want? 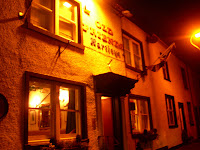 We missed out on the Stan Laurel which serves Ulverston Brewery Beers, Pity!
Posted by Tandleman at 18:02