Not Much Christmas Beer

It has been relatively quiet for me beer wise, or rather, variety wise. I've had more (excellent) Lees Plum Pudding and stumbled across Young's Winter Warmer in my local and dire JDW. I found it in good condition, dark brown rather than ruby as the back of the pump clip indicates and rather ordinary. It was labelled "John Young's". I'm not sure what he'd have made of it though.

I may have said here that I rarely drink beer at home. I used to do so to review beers and still do on occasion for the same purpose. My reviews can be found here should anyone be interested enough. Last night though as wine waned, I fancied a beer and remembered I had two bottles given to me from her recent visit to Wales, by our landlady, Michelle. First up was Lamb's Gold from the Pen-lon Cottage Brewery in Ceridigion. Unusually for its 3,2% strength the beer was bottle conditioned. It wasn't gold though, but light brown and not clear. It was vaguely malty with a little background hop and a light fruitiness, but I struggled to drink it. The label was both informative and full of the usual guff about unique taste - well of course technically that would be true I suppose. It gained its secondary fermentation from a "teaspoon of corn sugar". The bottle conditioning was good. Not too gassy and not infected! Is it wise to bottle condition a 3.2% beer? On t 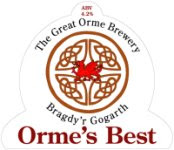 his showing, the jury is still out, but personally, I doubt it.

Next was The Great Orme Brewery Orme's Best at 4.2% and not bottle conditioned, but not pasteurised. This to me seemed a typical Welsh beer. Predominating malt, mid brown and little by way of hop. Not sure why Great Orme Brewery bothered. Don't they have Hancock's HB down there for that purpose?
Posted by Tandleman at 08:56

I think you can bottle condition beers of that strength with success, but if they are to sit for anytime you probibly need to prime with some lactose sugar or somthing else that cant be easily broken down by yeast.