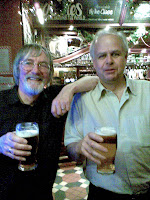 I am a little tired this morning. It was our CAMRA Branch's Christmas "do" last night at a well known Rochdale free house, the Cemetery Hotel. I had started the festivities a little earlier, as I had to change buses in Rochdale Centre, so popped into the GBG entries, the Flying Horse and the Regal Moon. Phoenix beers in both. In the FH I had a lovely pint of Snowbound, a typical 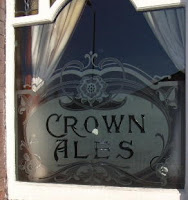 Phoenix beer with great body, mouthfeel and bitterness. Then to the RM where halves of Last Leaf, an autumn ale (where has that been hiding?) and "Double Gold" were enjoyed. Another time I will write more about Phoenix.

At the do we had pie and peas (though I declined - never eat on an empty stomach) and among the beers on offer was Skipton Brewery's marvellous Copper Dragon Golden Pippin. Pale, full bodied, hoppy, bitter and served in excellent condition. I had a few of them. Others enjoyed Bank Top's Flat Cap and Taylor's Landlord. we had a beer quiz in which my team came joint top, only to be defeated in a tie break and wonder of wonders, I was given a lift home by the wife of one of our lot, who had come to collect him. A perfect end to a good night!

The photos show Graham and Mark, having a good time and one of the pub windows, still showing Crown Brewery of Bury. Nice eh?
Posted by Tandleman at 10:51

So was the gorgeous brunette bartender working at the Flying Horse?

I think I've met the bloke with the beard.