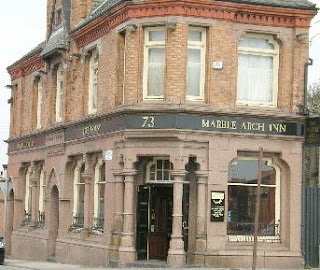 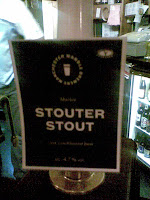 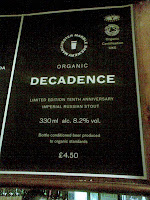 The Marble Arch is my Friday night haunt, mainly as I have to pick my better half up at Piccadilly Station and the pub is handily on the way home. For those who don't know it, it is a splendid tiled affair with lots of marble. Hence the name! It also has its own brewery which produces award winning organic and other beers.*

Given that I was driving, I had to choose my limited beers carefully. First up was JP Best, Champion beer of Manchester. I know this beer. I chaired the preliminary tasting panel that led to it being declared the ultimate winner in the Manchester Food and Drink awards. It rightly came top in our panel. Last night's sample was disappointing and I struggled with my half. That's cask beer for you! I also tried Janine's One which was hoppy and moreish. My usual tipple, the dry and hoppy Manchester Bitter was not available. The star of the show for me however was "Stouter Stout". A roasty, jet black, bitter and dry stout of 4.7%. This was an incredibly good stout and worth a visit to the pub just to sample it.

Also available for purchase by the 33cl bottle was "Decadence" an organic bottle conditioned Imperial Russian Stout of 8.2%. At a whopping £4.50 a bottle, I put the evil moment of purchase off until I am back, with no car and my pockets loosened by drink!

* Until recently the Marble Arch Brewery only produced organic beers, but a sign now tells customers that the soaring cost of organic ingredients has necessitated a change in policy.

The Marble Arch Pub and Brewery is at 73 Rochdale Road, Manchester. M4 4HY
Posted by Tandleman at 09:45

I'm surprised they think they can get away with £4.50 for a 33cl bottle of anything up in the thrifty North. Even in London that's steep.