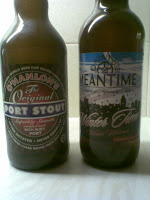 My final two tastings of the Christmas season were supped while watching "Extras" which I think is a cunning double bluff by Ricky Gervais to pretend that he is not a tosser when he actually is. But I digress.

Two much talked about beers are O'Hanlon's Port Stout and Meantime Winter Time. I have to say that I found both distinctly less than the sum of their parts. I had the O'Hanlon's first. It wasn't quite " if I hadn't paid for it, I'd chuck it down the sink", but it was certainly wandering in that general direction. The nose was dry and roasty, the beer was very dark, the head didn't last, the body was middling, the taste, sourish, with some roast malt and good bitterness. The finish was sharp, sour, dry and too long lasting for my liking. It wasn't a great beer.

The Meantime was remarkably similar in some general respects. It was dark, the head died very quickly, it had a kind of sourish touch to it. It was just about a better beer, but the dark cocoa taste and alcohol edge were unappealing. The middle was kind of figgy and coffee with harsh vanilla. with underlying resinous hops. It didn't meld into one in a way that it should, but remained as its constituent parts with a disagreeable harshness throughout.

Both beers were bottle conditioned and both had best before dates in September 2009. Both beers improved a bit as they warmed up. My guess is that they were just too young and hadn't had the time to let their potential develop. I hope my charitable theory is right and they are not just crap beers!

Sorry for the poor picture, but I couldn't be bothered with my camera, so just used my phone.
Posted by Tandleman at 22:52

These two, frankly, like a lot of RAIB are diasppointing. It may be that they need more ageing-I never leave my beer that long-but they should still be better than they are.

I hear Ricky Gervais always speaks well of you...

I doubt the Port Stout will improve with age, when its good it comes over like a reasonable mild, often its downright ropy. In either case I cant help but feel that a beer of that gravity and with those ingredients should be more complex than it is.

Give me an aged bottle of Hardy's or a Royal Oak anyday but I would leave the Port Stout on the shelf.